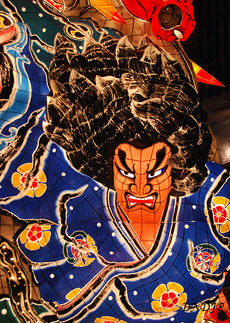 Japan has many traditions, practices, and holidays that reflect the culture of Japan.  Like most countries, religious beliefs and traditions are reflected in Japan's buildings and celebrations.   Shinto shrines and Buddhist temples dot the landscape and reflect the two major religions of Japan.  Most people in Japan, to some degree, can be considered followers of the Shinto faith.  A slightly smaller number can be considered Buddhists.  Unlike many other countries though, Japanese beliefs allow people to practice both Shinto and Buddhism at the same time; one faith does not prevent them from worshiping the other.   At different times in their lives they may practice the ceremonies of one or the other.  A person might have a Shinto ceremony at birth.  Japanese children may participate in the Shinto seven-five-three ceremony as they grow older in hopes of a healthy life and to mark various stages of life.  Japanese couples may have a  traditional Shinto wedding ceremony with the bride wearing a white scarf and white kimono (pictured to the right).  At the end their lives, many
Japanese might have Buddhist funerals.
Christianity is practiced by approximately two percent of the population of Japan.  The Portuguese brought Catholicism to Japan when they arrived on Japan's Tanegashima Island in 1543.  Within a few years other Portuguese arrived in Kyushu where they began to evangelize and win converts to their faith.  As their presence and influence increased, so too did their threat to the power of the local daimyo and leaders in Japan.  Christians subsequently were banned from practicing their faith by new laws and edicts.  Although several shoguns tried to eradicate Christians and their beliefs, they were never completely successful and Christianity has maintained a small presence in Japan.
​

The Giant Japanese Kites of Sagamihara and Zama Cities

One of the great traditions in Kanagawa Prefecture is the annual Giant Kites of Sagami festival.  Held on the banks of the Sagami River, it stretchers along riverbanks of both Sagamihara City and Zama City.  There are generally four separate areas where the kites are flown, and activities are held at each location.
Festivals related to kites take place in different parts of Japan every year.  Like other traditions, the necessary skills, and knowledge have been passed down through the generations.  The tradition of giant kites is said to date back to early 1830s during the Edo Period.  Initially it was a way to celebrate special occasions, but it grew over time to become a regional tradition in the Sagami area.
The kites used at the festival are created from scratch every year.  The kites are made of large sheets of bamboo poles, washi paper, and string.  The lightness of the materials allow very large kites to fly with a moderate wind.  Trailing each kite are two to three long ropes that act as the tails of the kites.  Interestingly, the kites are not considered to be flying until they have reached such a height that the tails of the kites no longer touch the ground.
Work on the kites usually begins in the fall when bamboo is cut and dried.  Sometime around March or April smaller pieces of washi paper are put together to form the large sheets.  Once the paper is dry, the craftsmen can then paint the kanji calligraphy.  The design changes each year and input is taken from the community regarding which kanji characters will be used.  Next, smaller bamboo poles are attached to larger bamboo poles that will become the main kite structure.  The paper is then tied to the kite and more bamboo are added for strength.  When complete, the kites can
measure an impressive 14.5 meters across!
All the Sagami kites, no matter what size, takes a team of people to get it airborne.  In fact, the kites are so large that they can pose a hazard to the spectators along the riverbanks. Thus, police and fire officials usually keep all spectators a safe distance away, but close enough to see the action.  The kites may remain in the air for several minutes or several hours.  This depends in large part on the
wind.
The Sagami kite festival is said to be one the 50 special Kanagawa Prefecture yearly events.  It is well worth the trip to enjoy the beautiful part of Japanese culture.