Italy is a beautiful country that can be proud of its long and colorful history.  A major part of that history involved the creation of an empire that was centered in Rome.  The Roman Empire, a powerful force for hundreds of years, once stretched from the Strait of Gibraltar to the Persian Gulf.  Like the Greek Empire before them, the Roman Empire had a knack for taking other people's ideas and improving them.  But they can also be credited with the creation of ideas and knowledge of their own making.  The Romans took their ideas and technology and spread them across their empire.  This allowed for a transfer of knowledge and way of life that survived long after the Romans ceased to exist as an empire.
So what is the legacy of the Roman Empire?  They took the Greek concept of democracy and created a new form of government called a republic.  They also developed laws that guaranteed citizens certain rights and established a Roman code of law.  Like the Greeks, the idea of citizenship was an important concept because it determined their rights. 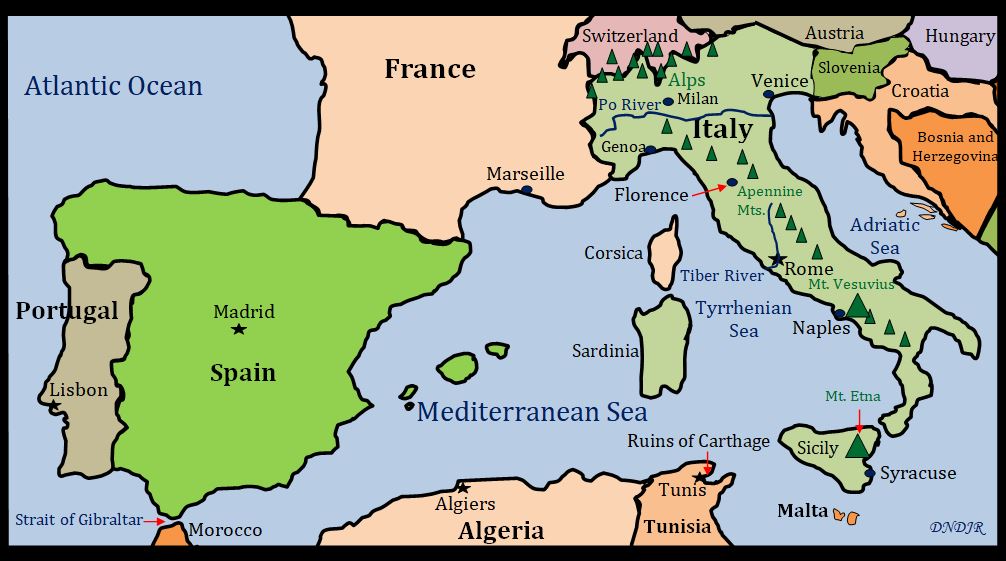 Many people are familiar with shape of Italy- a boot.  The boot shape forms what is called the Italian Peninsula.  There is also a large region above the peninsula that extends up to the Alps.  At the tip of the boot and across a small strait lies the Mediterranean island of Sicily.  It is home to one of the most active volcanoes in the world – Mt. Etna.  Italy’s largest island, Sardinia, lies farther to the west in the Mediterranean Sea.  The Tyrrhenian Sea lies between the eastern coast of Sardinia and the Italian Peninsula.  The Tyrrhenien Sea is where the island of Elba is located.  It is known as the island where France’s leader Napoleon was exiled between 1814 and 1815.  On the back side of the boot lies the Adriatic Sea.  It extends from the city of Venice and down to eastern coast of Italy.  ​As discussed earlier the Alps lie along the northern border of Italy.  To south the Apennine Mountains extends across a large part of the Italian Peninsula. ​
​Italy's longest river is the Po River.  It is located in the north and begins close to the French border.  It flows east across Italy until it reaches the Adriatic Sea.  The other major river in Italy is the Tiber River.  It begins in the mountains of the Apennine Mountains, flows through Rome, and then eventually flows to the Tyrrhenian Sea.  The picture below shows the mouth  of the Tiber River at Fiumicino.
​As mentioned earlier, Italy is home to one of the most active volcanoes in Europe - Mt. Etna.  But, it is not the only one.  Stromboli Volcano, on Stromboli Island, is located in the Tyrrhenian Sea and erupts on a regular basis.  This volcano is significant to volcanologists because the characteristics associated with its eruptions are used to describe a specific type of eruption – the Strombolian type eruption.  Strombolian eruptions are characterized by lava that bursts out of the volcano and arcs through the air before landing around the volcano.  Another famous volcano that most people are familiar with is Mt. Vesuvius.  It last erupted in 1944 and is now a famous tourist attraction.  Its popularity is due in large part to the excavations at the nearby city of Pompeii.  An eruption of Mt. Vesuvius in AD 79 destroyed the Pompeii, Herculaneum, and others leaving them buried under volcanic debris.  The forces that cause volcanic eruptions are the same ones that cause Italy to have numerous earthquakes every year.  The combination of older buildings and earthquakes can sometimes cause a great loss of life.

In terms of political geography, the roughly 63,000,000 people of the Italian Republic live mostly in Italy’s major cities.  Rome, the capital city is the most populous in the country.  The other major cities are Milan, Naples, Turin, Bergamo, and Palermo.

​The Etruscans
Another society was also developing during the time that Romans were starting to grow as a society - Etruria.   Called the Etruscans, they were Rome’s neighbor to the north.  Around the year 600 B.C. they began to expand south and eventually took over city of Rome.  At the height of their power they rules most of the Italian Peninsula.  With the Etruscans new ideas and skills that were learned by the Romans.  Arches and aqueducts were two major Etruscan architectural techniques the Romans learned.
​Rome Triumphs Over the Etruscans
The Etruscans ruled Rome for nearly one hundred years.  But an opportunity arose for the Romans to regain their independence when a power struggle erupted in the Etruscan leadership.  This came about when a Etruscan named Tarquin Superbus murdered the king in 509 B.C. and took power for himself.  An ambitious Roman names Lucius Junius Brutus saw this as an opportunity to resist Etruscan power.  He succeeded in taking power and is thought to have become the first consul in Roman history.

Rome’s independence did not bring an end to Etruscan menace.  Several attempts were made by Etruscans or people working for them to reclaim Rome.  These largely came to an end at the Battle of  Lake Regillus.  It is said that the Romans narrowly won a battle against their opponents.  Legend has it that the Romans were aided in their victory by the help of the two gods- Castor and Pollux. ​

Gaius Julius Caesar
The Roman Republic’s final ruler was Gaius Julius Caesar (Julius Caesar).  He held several positions in the Roman government from consul to dictator.  He solidified his fame though by leading the Roman army and conquering Gaul- a land that occupied modern France to Belgium and the edge of Germany.  His longest lasting non-military achievement was the creation of the Julian calendar.  It is still used today in a few areas of Eastern Europe.  The month of July, Caesar’s birth month, is named in honor of him.

After Caesar’s return to Rome the Senators began to work against Julius Caesar.  Perhaps due to jealousy or because they feared his power, they plotted his death.  They assassinated him in in the Senate on March 15 (the Ides of March) in 44 BC.

Note- Julius Caesar was the subject of a tragedy written by William Shakespeare.   In this way, his fame has spread through the world of literature.