​Geography is defined as the study of Earth’s physical, political, and cultural features.  The word geography can actually be broken down into several word parts that convey meaning.
“geo” means "Earth”                   “graph” means “write”                         “y” means “characterized by”
Continents - The Big Seven
Africa, Antarctica, Asia, Australia, Europe, North America and South America
There are seven generally recognized and accepted continents in the world.  The word "generally" is used because some people consider Asia and Europe to be one continent- the Eurasian continent.  Those who think that Europe is a distinct continent usually use the Ural Mountains, Caucasus Mountains, and the Black Sea as the border between Europe and Asia.  This map convention recognizes most of Turkey (the Anatolian Peninsula) as being in Asia, but the portion of the opposite side of the Bosporus Strait and Sea of Marmara, known as Thrace, as being located in Europe.  The continent of Australia is sometimes referred to as Oceania.  Although some locations are distant islands away from continental landmasses, they are usually grouped with or thought as being part of the closest continent.  For example, most of the islands in the Caribbean Sea are described as being in North America.
Where is it?
This sounds like a easy question to answer.  It is, but there are many different ways of answering it.  You might use the four cardinal directions to describe a location: north, south, east, or west.  But this is somewhat vague. In geography, we usually think of location in two different ways- relative location and absolute location.
Relative location can be defined as a general location description or the approximate geographic location of one location to another location.
The key word in this definition is approximate.  For example, someone might ask you to meet them at the train station in Oxford.  This sounds like a good place to meet, but where in the station will you actually meet?  Other examples of relative location are: most highway signs, "two blocks over to the west," "five houses down," and "near the coast."  Using a relative location is generally best used to describe locations that are familiar
to all of the people involved.
A better way to communicate is to use an absolute location. Absolute location can be defined as the exact geographic location (usually
described in terms of a specific address or geographic coordinates).  For example, let’s say you wanted to send a birthday card to your grandmother.  You need to use an absolute location so that it will arrive at your grandmother’s house, not simply the town she lives in. Writing that she lives “down near the mall” won’t work either because there likely hundreds of houses around the mall.  So, whether you are meeting someone for an appointment or sending someone a letter, an absolute location is essential.  Just remember, use a specific address. 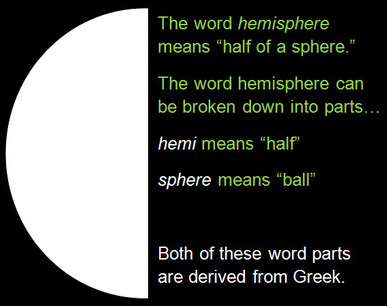 Geographic coordinates are a second type of absolute location that will give a precise location.  Geographic coordinates use invisible lines of longitude and latitude to describe a precise location.  These locations are expressed using a series of numbers.  Geographic coordinates, longitude and latitude, are usually described using degrees, minutes, and seconds.   The concept of hemispheres is directly tied to the use of geographic coordinates.  A hemisphere can be defined as “half of a sphere.”   Two hemispheres come together to form a complete sphere.
Geographers divide the world into two sets of hemispheres.   The first set of hemispheres divides our planet between a northern hemisphere and a southern hemisphere.  The equator forms the boundary between the two hemispheres.  The second set of hemispheres is occurs at the prime meridian.  It divides the plant into an eastern hemisphere and a western hemisphere.
Geographers use a system of imaginary lines that form a mesh across the globe.  These lines are called longitude and latitude.   Latitude is defined as imaginary grid lines that run east-west and measure distance north and south of the equator.
Latitude lines are also called parallels because they never touch!  The lines of latitude divide the world into degrees.  The equator sits at zero degrees latitude.  Since it sits in the middle of the globe, the equator is the longest line of latitude.   Lines that are located north of the Equator are referred to as numerical degree and the words “North of the Equator.”   These locations are located in the northern hemisphere.   Lines that are located south of the Equator are referred to as the numerical degree and “South of the Equator.” These locations are located in the southern hemisphere.
Lines of Longitude
Longitude is defined as imaginary grid lines that run between the North Pole and the South Pole.  Lines of longitude are also referred to meridians.  Here is an easy mnemonic tool to remember that longitude, and not latitude, begins and ends at the poles- Santa has a longitude way to travel from the North Pole!  All of the lines of longitude are the same length since they all span the distance between the poles.
Zero degrees longitude passes through the Greenwich in London, United Kingdom.   This is a very important line of longitude because it used to separate the Earth into the western and eastern hemispheres.  All locations west of the Prime Meridian ( 0° ) are known as a numerical degree and the words "west longitude."  These locations are in the western hemisphere.  Locations that are located east of the Prime Meridian are known by a numerical degree and "east longitude."  These locations are all in the eastern hemisphere.  The eastern and western hemisphere boundary on the opposite of the planet is located at 180° longitude.
Time Zones-  The lines of longitude, or meridians, are divided to reflect the 24 hours in a day.  Every hour the Earth rotates 15° and will make a full circle of 360° in one day.  The time zones of the world basically are divided along these 15° segments.  Time Zone Question to Ponder - How do the men and women aboard the International Space Station determine the correct time in space?