nagawa Prefecture is located on the eastern coast of Honshu at the entrance to Tokyo Bay.  If you use your imagination, you can think of Kanagawa Prefecture as being shaped like a camel.  The head, neck, and legs would form part of the border of Tokyo Bay.  Kawasaki and Yokosuka also have major Tokyo Bay ports.    The southern side of the prefecture lies along Sagami Bay and the Pacific Ocean.  The coast has beautiful sandy beaches which are popular with people across the Kanto Plain.
The western portion of the prefecture is dominated by mountains and lakes.  The Hakone area is part of the Fuji-Hakone-Izu National Park.  Closer to border with Yamanashi Prefecture is Tanzawa-Oyama Quasi-National Park.  It is home to the three highest mountains in the prefecture.  There are also several other smaller prefectural parks scattered around western Kanagawa Prefecture.  Major Rivers in Kanagawa Prefecture include the Tama River, Nakatsu River, Sagami River, and the Sakai River.

Miura Peninsula is an important Kanagawa Prefecture that borders both Tokyo Bay and the Pacific Ocean.  If you use your imagination and
think of Kanagawa's profile as a camel, the front leg would be Miura Peninsula.  This page includes just a few of the many places that you can experience on Miura Peninsula.  Enjoy!
Misaki Port 三崎港 - Life at the Eastern Tip of Kanagawa Prefecture
Miura City and Jogashima are located on Miura Peninsula in eastern Kanagawa Prefecture.  While not as famous as Yokohama or the beautiful beaches of Shonan, it is well worth the trip from Yokohama and Tokyo.  Forget Tsukiji and come to Misaki!  The people are friendlier and the crowds are smaller!
Misaki, now within Miura City, started out as a small fishing villages along Honshu's Pacific coast.  But, eventually, its prime location
near the by the coming together of water from the Oyashio and Kuroshio ocean currents.   By the late 1920's larger port facilities were
built and larger deep-sea fishing vessels started to operate from Misaki.  The fishing industry thrived up to and during World War II.
But when Japan lost the war in 1945, the allied powers occupied Japan and regulated most economic activities.  On June 22, 1946 the
Supreme Commander for the Allied Powers (SCAP) issued SCAPIN 1033.  This specified the "Area Authorized for Japanese Fishing
and Whaling."  This document was very detailed with a myriad of boundaries listed including a prohibition of passing the 165° line of
longitude.  SCAPIN 1033 eventually became known as the "MacArthur Line" and it restricted Japanese fishing until the end of the
occupation in April 1952.  Unfortunately, American nuclear testing in the Pacific Ocean in the 1950s and 1960s also impacted the
fisherman of Misaki.  Wide areas of contamination and exclusion zones closed many of their former fishing grounds.  This spurred
Japanese commercial fisherman to expand their operations to oceans around the world.
Misaki's economy continues to rely heavily on both local and deep-sea commercial vessels.  Vessels from around Japan continue as
well as the large Misaki Fish Market.
Most of the fish brought into Misaki is off-loaded and taken to the Misaki Fish Market.  A huge freezer building is located behind the
market and it can be used to store fish until the next auction.  There is also a large ice-making facility next to the market that provides
ice to store fresh fish.  The Misaki Fish Market is located in a long building next to the pier is essentially broken into two major
sections.  The section closest to the entrance is used to separate fish that is brought in from the fishing boats.  They are sorted and then
placed in different containers based on their species.  Buyers can walk among the fish to place bids and material on the floor to help
reduce bacteria.  The frozen tuna are weighed prior to the sale and each is marked with the weight.
A small portion of the tuna is cut out and attached to each tuna.  This allows the buyers to determine the quality of each tuna.  Generally,
tuna that contains more white than red meat will bring a higher price.
Visitors to the market are not allowed on the first floor where the fish sales occur.  But, the market has an excellent second floor viewing
area that allows you to look down at the activity on the first floor.  Most visitors will want to get to the Misaki Fish Market around 7:00
AM.  The fish auction is normally closed down and cleaned-up by 10:00. 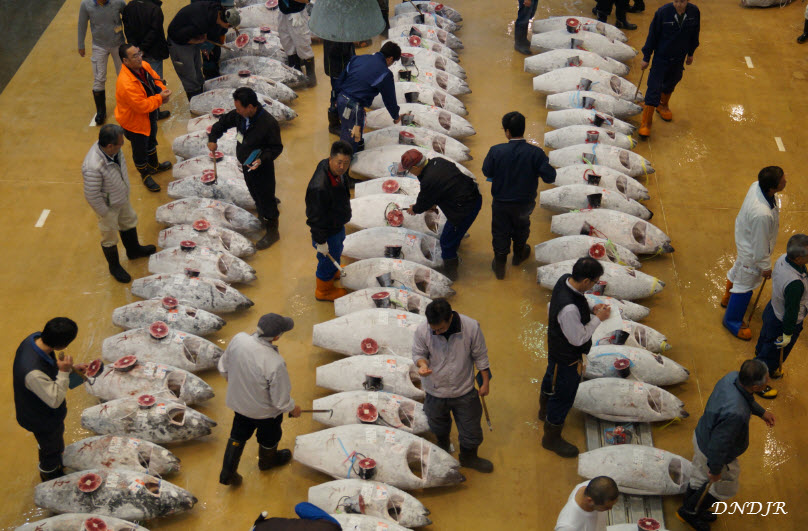 Frozen tunas are spread across the floor at the Misaki Fish Market. Buyers move about and inspect each tuna to determine their quality. A small sample on top of the tuna allows the buyers to see a cross-section and determine the amount of white meat versus red meat. Buyers then place bids for specific tunas on small chalkboards. The one with the highest bid gets to purchase the tuna.
Jogashima lies across Misaki Bay and is accessed via an inexpensive toll bridge.  Jogashime has ample parking around the island.  While no longer is affordable for families.  If you park to the west you will be in the vicinity of Jogashima lighthouse and several shops and restaurants.  IF you park in the center, near the end of the toll bridge, you will be in the vicinity of Jogashima Park.  Jogashima Park itself has parking for several hundred cars and provides quick access to the park and coastal waters.  The central area of the park is has several shelters, vending machines and observation areas.  Trails lead down to the coast waters and the rocky shore facing the entrance to Tokyo Bay.  There are also several trails that will take you across the sandy beaches and over to the Jogashima lighthouse.
Koajiro Forest in Miura City 小網代の森
Half a century ago Koajiro forest was much different than it is today.  The flat bottom land was occupied by rice patties and the hillsides were covered with trees that were occasionally cut down for lumber.  In the 1970s the land came into disuse and it became very dry.  Bamboo spread across the area that was once used to grow rice.  The area that is today called Koajiro forest was eventually purchased by Kanagawa Prefecture.   Over the years various groups worked to preserve the area.  Then, in 1998, a non-profit organization has created to restore the land and create a wetland environment.  Since that time teams of volunteers have worked hard to clear the bottom land and widen the river and numerous streams that flow through the forest.  They have also cut down the ubiquitous bamboo and replace it with flora that thrives in wetland environments.  These two things have benefited the natural environment and created an ecosystem where nature can thrive.